Skip to content
Boost Your Early Game For FREE With This Bonus Coupon (Available at Checkout Only) : STAR-KCL2-DGMM
Buy Your First Pack Here

Need F-R-E-E extra ingame money before buying your pack ? Use this referral code at checkout and enjoy your bonus 5,000 UEC : STAR-KCL2-DGMM

The Space Sim that fans hadn't dared to dream about

Star Citizen promises to be the ultimate space experience, offering a breathtaking variety of gameplay.

Want to spread chaos and destruction accross the galaxy? Become a ruthless pirate, steal ships and, if you feel like it, partner with other players to conduct major operations. Who said crime never pays? But beware, in the world of Star Citizen, you don’t forge your reputation as a criminal without making a few enemies in the process…
The higher the risk, the greater the reward !

Are you in a less bellicose mood? Then why not embark on wild races and become the greatest driver in the known universe?
Or what about building a commercial and industrial empire that will be coveted by all?  Unless you’d rather become a lonely bounty hunter?

But that’s not all… Explorer, miner, mercenary, doctor, scientist, mechanic,…
The possibilities are constantly expanding. Every penny earned by the crowdfunding campaign is reinvested in development.

What about you ? What about supporting the project right now?

Get your hands on the alpha today and follow the development as closely as possible, while contributing to the creation of the most ambitious Space Sim ever created.

The game is divided into 2 independent parts: Star Citizen (the MMO) and Squadron 42 (the solo adventure). No players will be left behind! 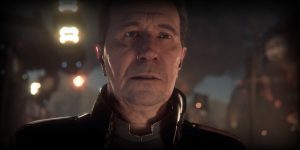 With Star Citizen, embark on an epic multiplayer journey with friends or strangers and travel across the galaxy, shaping your destiny as you see fit.

Want to have a little fun on a 100% solo experience? The Squadron 42 campaign should keep you on your toes, with its intense space battles and masterful narration, carried by a Deluxe cast: Gary Oldman, Mark Hamill, John Rhys-Davies, Gillian Anderson, Henry Cavill, Mark Strong,… The list is long and includes many great names, for a total immersion in a breathtaking solo experience!

Head to the detailed page
More about the referral program